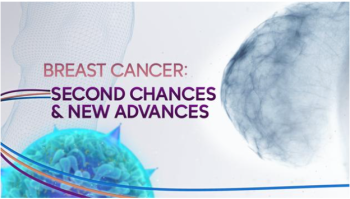 October is Breast Cancer Awareness Month, and this Saturday, WABC-TV will air a special feature, “Breast Cancer: Second Chances & New Advances” at 7:30PM. Hosted by Eyewitness News Anchor, Diana Williams, the breast cancer special highlights new advances that are helping those who are newly diagnosed or dealing with a recurrence.

While scientists work on the search for a cure, exciting progress has been made for those dealing with the worst form of breast cancer, triple negative breast cancer (TNBC). Dr. Linda Vahdat from the Weill Cornell Breast Center and NewYork-Presbyterian Hospital talks about the effects of copper depletion in the body. In addition to hearing about promising clinical trial results, hear from participating survivors who are living proof of the progress being made in the fight against TNBC, with hopes of FDA approval in the near future.

Additionally, doctors and researchers from other area medical centers share the latest on breast conservation for patients who have had a recurrence and new advances in immunotherapy offering targeted treatments for survivors.

A television news special that featured an interview with Weill Cornell’s Dr. Linda Vahdat along with a participant in a Breast Center clinical trial, was awarded a New York Emmy Award on April 14th. The special,  “Breast Cancer: New Options & New Promise,” was produced by WABC-TV and was awarded in the category of Special Health/Science Program.

Researchers at Weill Cornell Medical College have recently published the results of a Phase II clinical trial conducted at the Weill Cornell Breast Center. The results show that an anti-copper drug called tetrathiomolybdate (TM) that disables the ability of bone marrow cells from setting up a “home” in organs to receive and nurture migrating cancer tumor cells has shown surprising benefit in treating high-risk triple-negative breast cancer, one of the most difficult-to-treat forms of cancer.

The median survival for metastatic triple-negative breast cancer patients is historically nine months. However, the results of the study, recently published in the Annals of Oncology, show that if patients at high-risk of relapse with no current visible breast cancer are copper depleted, it results in a prolonged period of time with no cancer recurrence. Only two of 11 study participants with a history of advanced triple-negative breast cancer relapsed within 10 months after treatment with tetrathiomolybdate (TM).

“These study findings are very promising and potentially a very exciting advance in our efforts to help women who are at the highest risk of recurrence,” says the study’s senior investigator, Dr. Linda Vahdat, director of the Breast Cancer Research Program, chief of the Solid Tumor Service and Professor of Medicine at Weill Cornell Medical College.

Four of the study participants with a history of metastatic triple-negative breast cancer have had long-term benefit remaining disease free for between three and five and a half years.

“The anti-copper compound appears to be keeping tumors that want to spread in a dormant state,” reports Dr. Vahdat. “We believe one of the important ways it works is by affecting the tumor microenvironment, specifically the bone marrow-derived cells that are critical for metastasis progression.”

In addition, study participants with other forms of high-risk for relapse breast cancers — either stage 3 or stage 4 — without evidence of disease after treatment have also fared well. The progression-free survival rate among these 29 patients in the study has been 85 percent, to date.

“As good as these interim findings look to us, we cannot talk about significant benefit until we compare TM treatment to other therapies,” she says. Dr. Vahdat expects to launch a phase III randomized clinical trial in the near future.

This research is a report of the first 40 patients. The clinical trial, which began in 2007, has been expanded many times and now includes 60 patients, more than half of who have triple-negative breast cancer.